In What Way Is This Educational?

This afternoon I visited Horrifying Thing A: “Bodies Revealed“, which succeeds even less at convincing me that it is an entirely education-driven venture than did Gunther von Hagens’ “Body Worlds“, the original exhibition, which I saw years ago in Chicago.  Alas, I am not at this moment equipped to compare them (beyond saying that “Bodies Revealed” is but a sad, faint reflection of “Body Worlds”) or to comment on whether they are “educational” or “exploitative” (probably both, although “Body Worlds” has an edge on being, at some level, actual education).  I am an artist as well as a former worker with large carnivores; I am no stranger to dead things.  The anatomy, as well as the relation to art, fascinates me.  The topic which requires further consideration for me is a more moral angle: what is this exhibition for?  Why should I be giving it money (or not)?  How does it relate to other uses of dead things I have previously encountered, either thought-provoking, ridiculous or theoretically useful?  Why do human carcasses demand a more reverential attitude than do animal carcasses?

While looking around on the “Body Worlds” site for more information about the plastinates, trying to figure out what I did think about it all, I discovered Horrifying Thing B: von Hagens has an online store, in which “qualified users” can purchase actual plastinated human parts (as well as “formalin fixed specimens“).  Little wonder there is no photo available for the “wet whole body specimen, male, covered with skin”.  Okay, I can see how university anatomy departments might be really excited about the opportunity to get one of these, and I certainly support their use in education, but maybe they don’t need a publicly accessible web store.  More stuff for my brain to process (“Is it art?  Is it wholesale exploitation?  How can he sell them?  Where does he get all these people?  Is education worth the inevitable collateral of people buying these as coffee table decoration?  Is it okay if the bodies are all willing donors?”) later.

The site also notes that “Body Worlds” has some animal plastinates sprinkled in among the humans (my personal favorite is “Horse and Rider“, which in person embodies the word “awe-inspiring”).  In 2010 the animals got their own exhibition, “Body Worlds of Animals“.  This is, on the whole, all right.  We use dead animals, for better or worse, as educational tools all the time, and I’d rather see a dead animal made useful in some way than tossed in the trash.  However, Horrifying Thing C, today, was the discovery that the “Body Worlds” store is selling jewelry made of delicate, individual slices of plastinated fruit and, er, animal parts: 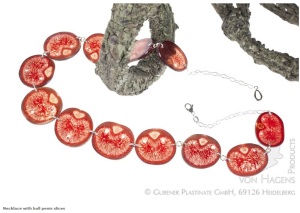 Those charming red circles are plastinated sagittal sections through a bull penis.  There are, of course, a matching bracelet and earrings.  They seem to have a lot of extra bull penises around the place, don’t they?

While part of me is desperate to get one of these for my mother-in-law, most of me is firmly in the “that ain’t right” camp.  There’s no way this is “educational”, and it’s sort of skirting the edge of being “art”.  I don’t mind animals (and, in many cases, consenting humans) being used for actual education, but I have problems with the gratuitous use of animal parts in art, especially if the animals are slaughtered especially so the art can occur.  I don’t think I need to be buying any of these, even if they are (as is likely) just using slaughter remnants of animals which are being butchered for meat and thoroughly used anyway.  My strongest feeling here, though, is that in no other context would anyone willingly wear goat testicles as fashion accessories.