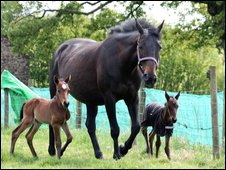 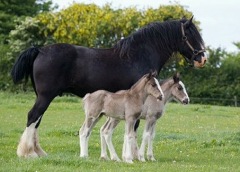 Humane and safe youth rodeo, by mettem on morguefile.com

One of my favorite blogs, Snarky Rider, had a post discussing a rodeo event of which I’d never heard, where groups of three children, about 8-12 years old by the looks of it, run up to a foal, grab it, get one of the kids balanced on its back and race for a finish line.  The original post, with photos, from the Goat Whisperer, is here.  The event disturbed me on several levels, and I thought I’d write about it, because people ought to know this is happening.

The event appears to be the “baby” version of an equally (in fact, much more) unpleasant activity, of which I was also previously unaware, called the “wild horse race” (link goes to video; here’s another), wherein adult humans run up to an adult horse, grab it, and attempt to ride it.  The wild horse race doesn’t just take place at the Yakama Nation “Treaty Days” rodeo — they do it at many rodeos.  In fact, I had a lot of trouble figuring out at exactly which rodeo this particular event took place; it actually appears to have taken place at the “White Swan Junior Rodeo Association Spring Round Up” or “White Swan Junior Rodeo”, which seems to be a different event than the “Yakama Nation Treaty Days” rodeo (which features mostly adults).  There is also a Navajo Nation Treaty Days rodeo, and in fact there’s a whole association governing Native American rodeo in the Western states.

I can’t find a lot of info on the “junior wild horse race”.  It appears to have been held previously: here are some photos from the 2011 event, and from the 2010 event.  The event differs from the “dinner bell derby” or foal race, which is held at multiple rodeos, where foals are temporarily separated from their mothers (who are within sight), taken to one end of the track and released, to run to their mothers, who form the finish line.  (Whether or not this is cruelty may come down to the individual players in each individual event.  The video I saw involved some struggling and smacking to get some nervous babies to stand still and then to run, but the run itself was quite short and they made it to mama in generally good shape.)

That the baby wild horse race is not mentioned widely online does not mean it is not popular.  It just means that it’s not mentioned on the fliers.  Googling for “junior wild horse race” brings up some results, including mentions of such events happening in Rapid City, South Dakota and Chadron, Nebraska.  (Please do not get me started on breeding miniature bulls just for youth rodeo.)  This implies it’s a little more widespread than just one rodeo in Washington state.  On the bright side, they may not all be describing the same event: here are some photos from the Wood Mountain Rodeo’s 2010 junior wild horse race.  There are kids involved, but they are: a) older, b) wearing safety gear, and c) working with adult horses.  Image searching for “junior wild horse race” turns up a couple more photos from different rodeos, again with older kids, safety gear, and adult horses.  Not that I approve of this event in general, but I can think of ways where a “wild horse race” with adult horses and sane older kids/adults in safety gear can be done humanely for all parties, and I can’t imagine a single way it’s possible for three eight-year-olds to humanely — or safely! — aggressively wrestle into submission a three-month-old foal.  (It’s also not something I’d want my eight-year-old — or my foal! — to be learning when it comes to human/animal interaction, but that’s just my personal opinion.)

Hopefully, the White Swan Junior Rodeo Association’s use of extremely young horses and extremely young children in a wrestling contest where they are both just asking to get broken is a lone blip.  (And, as Goat Whisperer suggests, we should be writing the Yakama Nation and asking them, politely, if they have lost their minds.)  Either way, this is another in a long line of very good reasons not to attend or support a rodeo.  Surely in this day and age we can think of more productive things to do with our spare time? 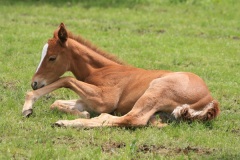 I read with mixed feelings an article from the Toronto Sun (which appears to be the original source) about the results of a decision ending provincial funding for the area’s harness racing industry.  The article is a tad suspect, because no sources are really named — “a number of sources”, including “an area horseperson, who asked not to be identified”, are quoted as saying “an unknown number” of foals are being euthanized “moments after birth” because breeders are facing an unanticipated, severe economic downturn.

Apparently, the Ontario Lottery and Gaming Commission has decided to stop funding harness racing (and, it appears, other equestrian activities) with a portion of the annual revenue it gets from slot machines.  The Commission will instead be funneling the monies into funding things like hospitals and schools.  The Canadian equine world is not pleased about this, and neither are a lot of people involved in the gaming industry.

Knowing this, the article looks less like “news” and more like a desperate effort to smear those responsible for the shutdown.  I’m interested that they’re not saying, “People are losing jobs!” but “These poor baby horses are being killed!”  This smacks of some media person trying to pull on heartstrings.  It is likely true that someone, somewhere, may be euthanizing some of their herd due to the economic slam.  However, since horse slaughter is legal in Canada, it is much more likely that a breeder finding themselves with extra horses and no money will simply sell the unwanted animals by the pound for slaughter — a much more profitable enterprise than paying a vet for chemical euthanasia and disposal.  Thus I seriously doubt this story — no dates, no names, no sources, no traceable facts — just a lot of people suddenly terrified that the decision might result in someone killing baby ponies!

Honestly, if I heard that a breeder was humanely euthanizing their suddenly unwanted foals rather than trying to, say, sell them for slaughter, give them away for free on Craigslist, or just passively neglecting them to death (please don’t make me find links to examples — I assure you there are plenty), I would be amazed that the breeder was taking such responsibility for the animals under their care.  Sure, I’d be happier if they were finding loving homes for the horses, but, in a world of awful realities, there just aren’t enough homes for everybody.  I’d so much rather the breeders took responsibility for making sure the babies under their care never got given to an inappropriate home, sent to slaughter or allowed to slowly starve to death.

The world is really messed up when I read a story (however journalistically dubious) about baby ponies (often accompanied by heart-wrenching photos of adorable, fuzzy baby horses presumably being menaced by this scourge) being euthanized because their owners are threatened by sudden economic crisis, and immediately think, What responsible owners!  Good for them not letting the poor things rot or selling them for meat!