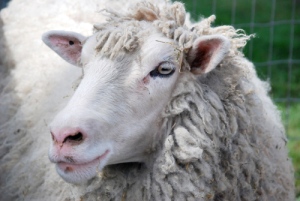 Sheep. Photo by penywise at morguefile.com.

A while ago, I noted a flurry of articles which casually mentioned that, when two barns  at an egg farm burned down, 470,000 chickens died.  No-one seemed to find it a cause for concern that this meant each barn had held 235,000 hens.

Today I noticed many articles about a truckload of sheep which “crashed, rolled, and hung over an Australian overpass” on May 31, 2012.  (As a bonus, that particular article also begins with the highly professional and journalistic sentence “Counting sheep has never been so horrific.”)  Sheep rained over the side of the overpass and fell on motorists below.  This article has a little more detail, and some rather sad photos if you’re feeling brave.

And again, a major point is being missed….

There’s no information about the model of truck involved (there are photos though, including some here, here, and here), but, concerning the maximum size of haulage vehicles, the Roads and Traffic Authority of New South Wales mandates:

I’m not insane, apparently — this is a real thing, against which people have been protesting for a while.   Why aren’t we hearing more about it?  A Google search for “australian sheep truck” turns up pages and pages of nearly verbatim reposts of this story — why isn’t anyone curious as to how four hundred sheep got onto one truck, or why they are allowed to be crammed in that way?

One response to “400 Die In One-Vehicle Crash”