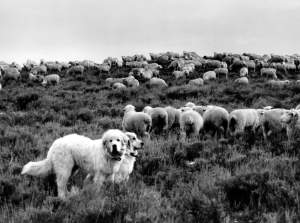 someone who used to work extensively with wolves, I have something of a background with, and fondness for, livestock guarding dogs.  These dogs are a primary, generally quite effective, defense for ranchers against local predators, including wolves.  They live and roam with the flock, providing 24 hour protection, at little cost.  The process works via carefully raising dog puppies with the flock, so that the pups become socialized to the sheep — the pups become kind of “honorary sheep” and fiercely defend their adopted “conspecifics”.  This can be protection for both predator and prey.  In Africa, dogs are employed to defend livestock against cheetahs — protecting the stock from the cheetahs, and the cheetahs from the wrath of the livestock owners.

Today I found myself looking at an article which suggests the dogs might be a little too fierce.  The dogs “snarl”, and “on some occasions, chase” tourists around the Molas Pass area in the San Juan National Forest.  I am curious as to how close the tourists are getting — in the wild back country of Colorado, which I recall being a very wide-open place — to the flocks for the dogs to become alarmed.  The dogs generally do not roam far from their flocks and do not usually become aggressive unless they, or the sheep they protect, are directly and closely approached.

In any case, “snarling” and “chasing” things that get too close to the sheep are kind of required behaviors for livestock guarding dogs.  They aren’t trained to be aggressive, but they are not specifically bonded to humans, either.  They are designed to deter the approach of unfamiliar mammals (and that includes humans) to their adopted flock.  Wasn’t that kind of the point?

However, this is just a briefly trending argument between two groups of people (ranchers and tourists) who want to use the same piece of land for two different activities, and it isn’t a particularly new thing (people have been arguing about land use for years and years).  What is most interesting to me is the photo accompanying the article I first saw (which was not the original, source article).  The original, source article has photos of Akbash guard dogs doing what they do 99% of the time — standing in a field, quietly surrounded by sheep.  The article I first saw used a “file photograph” of two dogs fighting to illustrate the exact same story.  Also, contrast the two titles: the original title, “Problem dogs in backcountry?“, and the title of the story with the fighting dog photo, “Fierce sheepdogs alarming tourists in SW Colorado“.

Same article, two entirely different slants — brought about simply by changing the title and the accompanying photo.  Another good reason to always check the source of an article, no matter where it’s published.  (For full disclosure, the photo I used for this post came from this site.)